On the culture of commoning 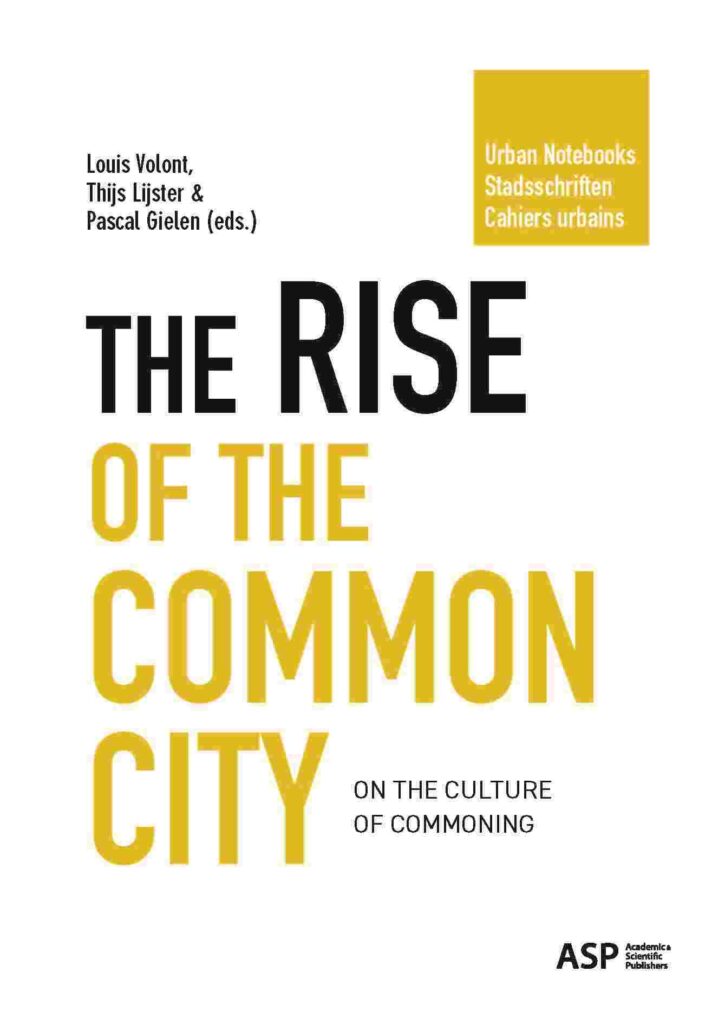 Artists and creative workers have long been attracted to urban environments. Yet the ‘creative city ‘of the 21st century comes with its own pitfalls. From precarity at the level of the worker to gentrification at the level of the city: the creative engine starts to sputter. Therefore, after or even against the creative city, this book highlights the ‘common city’. The Rise of the Common City explores the value of commoning for cultural practices in urban contexts. The volume defends the hypothesis that a common culture offers better guarantees of urban sustainability than a purely market- or government-driven culture. After all, cultural dynamics are only possible by sharing. We understand culture in a broad anthropological sense, as a socially shared sign and meaning system through which urbanites can give meaning to their environment and their lives. Creative labour and artistic practices keep cultural dynamics alive by intervening in such processes of meaning. They can question, redraw or simply confirm meaning-making processes, habits, values and norms. That is why culture is too important to be left to the market and the government alone. Culture belongs to everyone. The Rise of the Common City examines the value of commoning for culture, but also the value of culture for commoning. What is the culture of the commons? And vice versa, what strategies, norms and rituals do commoners use to define a common space between government and market? The book sketches answers to these questions through conceptual and empirical work, ranging from sociology and philosophy over urban and cultural studies to law and policy science.

The volume includes contributions by Walter van Andel, Iolanda Bianchi, Gideon Boie, Giuliana Ciancio, Lara García Díaz, Pascal Gielen, Arne Herman, Gökhan Kodalak, Thijs Lijster, Lara van Meeteren, Hanka Otte, Ching Lin Pang, Tian Shi, Stavros Stavrides, Maria Francesca De Tullio, Louis Volont and Bart Wissink. If there is any conclusion to be drawn, it might be this: the future of culture will have to be common, or there will be no culture at all.

Louis Volont is a sociologist. He is a Fulbright visiting scholar at MIT’s School of Architecture & Planning (Program in Art, Culture & Technology) and a postdoc at the HafenCity University Hamburg. He studied sociology in Leuven and Milan, and defended his PhD in 2021 at the University of Antwerp (Shapeshifting: The Cultural Production of Common Space, Antwerp University Press). Louis investigates processes of urban future-making, urban commoning, socio-technical imaginaries and the work of Henri Lefebvre. His work has been featured in journals such as Antipode, City & Community and Social Inclusion.

Thijs Lijster is assistant professor of philosophy of art and culture at the Faculty of Arts of the University of Groningen, and was a postdoc researcher at the Culture Commons Quest Office of the University of Antwerp. He published Benjamin and Adorno on Art and Art Criticism. Critique of Art (2017), was editor of The Future of the New (2018), and coeditor of De Nieuwe Duitse Filosofie (The New German Philosophy, 2013), De Kunst van Kritiek (The Art of Critique, 2015), and Spaces for Criticism. Shifts in Contemporary Art Discourses (2015).

Pascal Gielen is full professor of sociology of art and politics at the Antwerp Research Institute for the Arts (Antwerp University – Belgium) where he leads the Culture Commons Quest Office. Gielen is editor in-chief of the international book series Arts in Society. In 2016 he became laureate of the Odysseus grant for excellent international scientific research of the Fund for Scientific Research Flanders in Belgium. His research focuses on creative labour, the institutional context of the arts and on cultural politics. Gielen has published many books which are translated in English, Korean, Polish, Portuguese, Russian, Spanish and Turkish.
Published: June 1, 2022